Tuesday in Ankara, 486 defendants were paraded before the families of those killed by putschists during last year’s FETÖ coup attempt as the country’s largest trial on the attempt opened with an angry crowd trying to breach police barricades to denounce the putschists.

The trial of 486 suspects ranging from generals to senior figures of the Gülenist Terror Group (FETÖ) accused of carrying out the July 15, 2016 coup attempt commenced Tuesday amid tight security in a courtroom in Ankara. The suspects are accused of commanding the coup plot from Akıncı Air Base in Ankara where fighter jets and helicopters took off to strike strategic locations, including Parliament and places where anti-coup crowds gathered. The defendants were escorted to the courtroom inside a massive prison complex in the Sincan district where they are also jailed. Soldiers with automatic rifles accompanied the defendants while police carrying shields were deployed behind the barricades separating the courtroom entrance from a crowd of families of coup victims and angry citizens.

Some in the crowd tried to force their way through the phalanx of police officers, chanting slogans against the coup attempt and calling for the death penalty for the accused. Kemal Batmaz, a former business executive at a FETÖ-linked conglomerate, was the first to be taken into the courtroom as defendants were brought in a single file. Behind him were former General Akın Öztürk and putschist troops of every rank as well as civilian FETÖ members. All defendants face life imprisonment for plotting to overthrow the government and kill the country’s leaders.

The government declared war against FETÖ when it started a crackdown against members of the terrorist group in law enforcement, the judiciary and bureaucracy a few years ago. The coup attempt preceded a planned move to weed out FETÖ members in the military. The 461 suspects were captured when the coup bid was foiled thanks to a strong, unprecedented public resistance that cost the lives of 249 people who confronted the putschists. Seven, including FETÖ leader Fetullah Gülen and Adil Öksüz, a senior figure of the group charged with masterminding the coup attempt, remain at large. The remaining have been released pending trial.

The courtroom, touted as the biggest in Turkey with a capacity for more than 1,500 people, has previously held mass trials related to the coup bid. It was in this courtroom where Öztürk and more than 200 suspects were put on trial in May with other generals charged with leading the coup attempt. 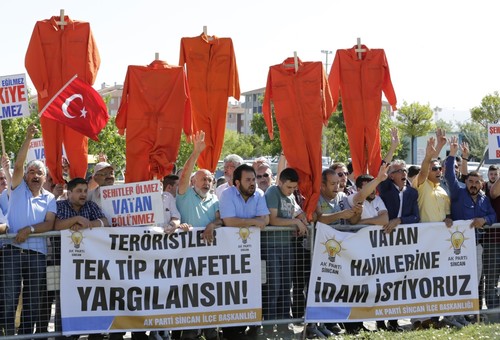 A crowd outside the courthouse holding orange jumpsuits they have asked authorities to force defendants to wear.

In and around the courtroom, police and gendarmerie troops took strict security measures with snipers deployed on the roof of the building and a drone flying above the crowd gathered outside. The hearing, which started with the formal identification of the defendants, was adjourned due to the court computers malfunctioning while some plaintiffs exchanged insults with the defendants. The judge warned everyone that disorder in the courtroom would not be tolerated. “You will burn in hell,” one of the plaintiffs shouted at Hakan Karakuş, a pro-coup officer who also happens to be son-in-law of Akın Öztürk. Karakuş was among fighter jet pilots that dropped bombs on civilians in Ankara.

The hearing was underway when Daily Sabah went to print with judges summing up the lengthy indictment. A large number of people, from President Recep Tayyip Erdoğan to army generals targeted by putschists, lawmakers and families of civilians killed by coup plotters also presented their formal request to the court to be admitted as co-plaintiffs in yesterday’s hearing. The trial is expected to continue until Aug. 19. It will likely take months before a final verdict is announced.

An indictment on what happened at Akıncı Air Base during the July 15 coup attempt claims Gülen would have settled in a building at the base if the coup had succeeded. It names Öksüz and Kemal Batmaz as two point men for Gülen who executed the coup attempt with the aid of Öztürk, a former general accused of coordinating the coup efforts as the leader of the junta’s Peace At Home Council.

Öksüz is the only man who disappeared after the coup attempt following his controversial release by judges suspected of being supporters of the terrorist group, while Gülen lives in Pennsylvania in the United States.

Gülen denies links to the coup, but evidence that surfaced after the putsch was quelled indicates he gave approval for the plot to seize power by FETÖ-linked military officers.

The indictment, accompanied with photos of Akıncı Air Base and images from security cameras showing those involved in the coup, claims Gülen was “number one” in the coup attempt and Öksüz and Kemal Batmaz are named as his accomplices. Öksüz was detained by security forces at the base after the coup was suppressed and Batmaz is seen in security camera footage walking freely through the halls of the military base’s command floor, and at some point, receiving a military salute from an officer. Batmaz was a businessman running a FETÖ-linked company and among the few civilians at the base on the night of the coup.

The 4,658-page indictment claims 10 civilians were involved in the coup attempt. President Recep Tayyip Erdoğan, ministers and lawmakers are among the plaintiffs in the indictment. Erdoğan escaped an assassination attempt during the coup attempt and fighter jets that took off from Akıncı Air Base bombed Parliament. Prosecutors say 11 F-16 jets dropped bombs on several locations while two aircraft tried to scare people by creating sonic booms in Istanbul. Two other fighter jets were used to track down Erdoğan’s plane as he was brought out of trouble’s way when an elite team of assassins landed near the hotel where he was staying in southwestern Turkey. Coup pilots also flew 10 F-16 jets that took off from Akıncı.

The indictment, the most comprehensive of its kind so far in relation to the coup attempt, gives details on various episodes of the coup attempt that revolved around Akıncı Air Base. These include the bombing of police headquarters, the headquarters of a satellite provider, an elite military unit opposing the coup, Parliament and streets near the Presidential Palace as well as the dispatching of fighter jets from other cities to Ankara. The defendants are also accused of attempts to kidnap generals opposed to the coup in Istanbul and bring them to Akıncı Air Base. Chief of General Staff Gen. Hulusi Akar and other top military brass opposed to the coup were also held at the base, which was closed after the coup attempt.

Gülen is already implicated in a string of coup-related trials as the prime suspect, but this retired imam, whose Hizmet (Service) movement evolved into a terrorist cult, planned to return to Turkey from his self-imposed exile, the indictment claims. Like Iran’s Ayatollah Ruhollah Khomeini, Gülen, who posed as a man promoting religious teachings, would return home if the coup succeeded, and for his return, the coup plotters even prepared a building inside Akıncı.

The base would serve as the new headquarters of the Turkish military if the coup had succeeded and evidence indicates coup troops brought the military’s flag, originally kept in the Office of the Chief of Staff, to the base. Gülen would “contact” Akar according to the indictment. Akar has told prosecutors that Hakan Evrim, a putschist general who met him after his abduction from the military headquarters, told him he could “arrange a phone call with our leader Gülen.”

Critics of FETÖ say Gülen always tried to wield power in Turkey, and since his rise to prominence in the 1970s as an influential imam, he plotted to have his followers infiltrate law enforcement, the judiciary, the military and bureaucracy. His sermons in the 1990s hint at his ambition to seize power, as he instructed his followers to infiltrate the “veins of the state” and wait for the right time for a complete takeover. FETÖ is accused of running a campaign of massive infiltration into the military for decades, and its members managed to disguise themselves for years, according to the prosecutors. Another indictment says the coup attempt was premature, as FETÖ members planned it for a later date but rushed when the state decided to dismiss those suspected of having links to FETÖ in the military at a meeting of the Supreme Military Council (YAŞ) in August 2016.

Hayati Yazıcı, one of the deputy chairmen of the ruling Justice and Development Party (AK Party), led a delegation of party members who monitored the trial. Speaking to reporters before the first hearing started, Yazıcı said they believe that the putschists will be handed down the sentences “they deserve.” Yazıcı said that 77 out of the 249 people who died on July 15, 2016 were killed because of actions of the putschists at Akıncı and there were 444 plaintiffs who sued those involved. “Our party will also apply to be admitted as a co-plaintiff in this trial,” Yazıcı said. He said the Turkish judiciary is pursuing a fair trial for the defendants. “They don’t prolong the trials, but they also comply with international legal rules and Turkey’s own laws. This is something that victimized the entire nation. There are multiple perpetrators and we hope each one will be punished accordingly,” he said. Yazıcı said they understand the people’s reaction as the crowd shouted slogans behind him during his conversation with reporters. He also spoke about the defendants’ clothing, a matter raised by the public and later by the government, after defendants in other trials were brought to court in suits and one defendant wore a T-shirt reading “Hero.” He said the government was working on a single type of uniform for all defendants. “We will never allow defendants to wear something inscribed with propaganda,” he said.

The first coup trials started in December 2016, and since then, dozens of trials have begun across Turkey. More than 50,000 people have been detained or arrested for suspected links to FETÖ following the coup bid. Security forces also carry out operations almost daily to capture suspects involved in the coup attempt or those suspected of working for FETÖ.